I still haven't received my stimulus payment, which is insult added to injury, since I didn't get a refund (wah!) either. But I was amused at how people are spending their stimulus payments. Mine, which I haven't received, has already been spent on a new starter and battery for my car, and the leftover went to an oil change and my recent excursion to Calgary. I don't think this is what W had in mind.
Posted by Seema at 10:23 AM No comments:

Is it just me or is this article about wedding registries super tacky? To wit: For some reason (or lack of reasoning), many brides think they need a place setting, glassware, and appliances from several different shops. And when they receive the gifts and know they won't use them, they feel guilty for returning them. The fact of the matter is that you can't keep every gift, and you're really not expected to. Don't feel bad about making returns. Everyone does it. How about this -- don't register for stuff you don't need so your guests don't waste their time buying something you won't use?
Posted by Seema at 3:15 PM No comments:

I read this article last week in Calgary called "The Cost of the Next Barrel of Oil." The article is now only pay-per-view and/or available through google cache, but the really interesting part of the article is here. It talks about where oil companies are going to look for the next barrel, the issues, struggles, successes, and results of it, and some of the trends going on. Example:

"Cost of technology in the Gulf of Mexico: The added depth adds to the cost. While it costs around $1-million (U.S.) a day to hire a rig to explore in shallow water, Chevron is spending about $1.6-million a day for a deep-water drill ship to work on its Tahiti prospect; it costs around $200-million to drill a single well in the area. Analysts estimate that to produce a barrel of crude from the ultradeep area would cost above $50 a barrel."

It's definitely worth a read, but click fast -- who knows when it will turn into pay-per-view only.
Posted by Seema at 8:19 PM No comments:

I'm in the process of uploading all of my pictures from my trip to Calgary last week. There are a lot of them and it took me a long time to go through them all -- I think 300 total, and only a fraction of those are getting uploaded. Okay, maybe half. That's the good and bad thing about digital cameras with a 1 gig memory card with capacity for 2700 pictures. I can take as many pictures as I want and only keep the ones I like, but then I have like a gazillion pictures and many of them are the same as others, but from different angles, or more "artistic" or sometimes they are victims to shaky hands, so I often take multiple shots "just to make sure." Then I have to decide which of two identical pictures is the better of the two. Decisions, decisions.

As an FYI -- some of the pictures posted on this blog will probably disappear due to limitations on the Flickr account where they live. So if you see broken pictures, that's why. The Calgary pictures are taking up all the room in my account now.
Posted by Seema at 8:40 PM No comments:

Isn't it just gorgeous? Incidentally, seconds after I snapped this picture, it started to snow. 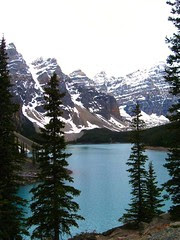 Email ThisBlogThis!Share to TwitterShare to FacebookShare to Pinterest
Labels: me, pictures, travel

It just occurred to me -- that title sounds a whole lot like a Lifetime movie coming to a television screen near you, probably starring Tori Spelling and Melissa Gilbert and maybe even Melissa Joan Hart as a bonus. That being said, this isn't a post about a Lifetime movie or even about any of those actresses. Instead, it's about David Copperfield and how he flies* -- see film complete with cartoon re-enactment below. The actual video of him flying, which is completely shmoopy and Lifetime-esque, is here. I've got nothin' when it comes to the mullet. Like I said, shattered illusion.

* I cannot possibly allow the very obvious grammatical error in the video title to invade my blog
Posted by Seema at 8:38 PM No comments:

Email ThisBlogThis!Share to TwitterShare to FacebookShare to Pinterest
Labels: LotD

1. Someone suggested reducing demand for gasoline by cutting the USPS' service from six days to five

2. In my salsa aerobics class, a woman was texting while shuffling her feet and shaking her hips

3. My dentist gave me a bottle of champagne
Posted by Seema at 9:38 PM No comments:

Even though it was expected and inevitable, it was still very hard to watch Hillary Clinton suspend her campaign today.
Posted by Seema at 4:14 PM No comments:

Email ThisBlogThis!Share to TwitterShare to FacebookShare to Pinterest
Labels: election 2008

The latest "high gasoline price" spin has been the drop in truck and SUV sales. I'm happy to hear this. No one needs a Hummer to go grocery shopping. And no, I don't feel sympathy because people are paying $100+ to fill up those things because low gas prices are what encouraged people to shift to the suburbs and buy gas guzzlers, thus increasing our consumption rate here in the US. So that's the upside of high gas prices -- people are shifting their behaviors and thinking about conserving and to an extent, environmentalism. Problem is, we've been there done, that before, and succeeded in bringing prices so low that people forgot about being held hostage to OPEC. Let's hope that doesn't happen again.
Posted by Seema at 8:34 PM No comments:

This isn't the most exotic recipe around, but it's super easy and tasty to make, and fits three key categories: vegetable, grain, and protein. Well, the vegetable is a little stretch, but I'm counting the tomato sauce (which comes out of a jar) as a vegetable. Nothing here was homemade and I whipped this dinner up in about 15 minutes and it was perfectly proportioned and satisfying. I love that in a meal.

I started off by thawing two veggie burgers, broken into halves, in a frying pan on the stove. I used Morningstar mushroom lover's burgers, but any burger will do. Meanwhile, I was also boiling water on another burger for the pasta. 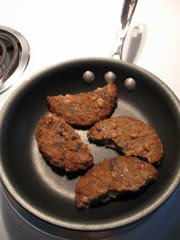 After the burgers were mostly thawed through, I removed them from heat and chopped them up into bite size chunks. 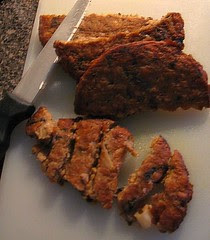 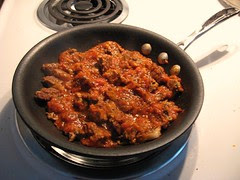 And finally, after the pasta was drained, I poured the warm sauce over the pasta, and enjoyed myself a rather quick, tasty, and healthy meal. Not inexpensive, because veggie burgers aren't really that cheap anymore -- about $4 for a package of four now -- but still, this meal probably cost me about $3, which is still cheaper than going out to eat, which is what I would have done in the past when I was starving after a workout. Much better for the waistline and the wallet! 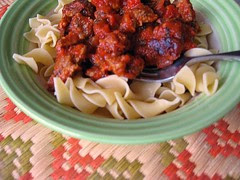